Back to News & Press 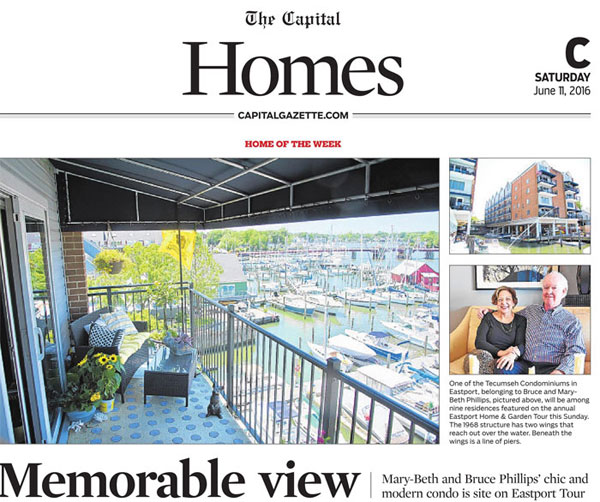 The Phillips couple may be technically retired, but their decorating style is anything but tired. Standing in their two-story condo,
one of the Tecumseh Condominiums in Eastport, Mary-Beth Phillips said, “We decided we didn’t want anything traditional.” 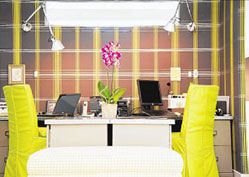 And, It’s Not
This Sunday, their condo will be among nine residences featured on the annual Eastport Home & Garden Tour. From the street, the 1968 structure is a non-descript brick building. Step inside the lobby and what appears to be a large mural of a waterfront scene is actually a real scene seen through wide, floor-to-ceiling windows. The building, from the air, is C-shaped. Its two wings each reach out over the water. Sheltered beneath the wings is a line of piers. A series of motor boats, small yachts and inflatable dinghies are moored at the berths. The allure of more views of Spa Creek and Annapolis Harbor from a higher vantage point is a good lure to hustle upstairs in the building’s small elevator.

Bruce and Mary-Beth Phillips moved into their Eastport haven three years ago after their unit was entirely redone. They purchased it in 2012 and spent a year on renovations and interior design. As condo residents, they have two docks and access to the building’s swimming pool.

“We have a tough commute to get to our boats,” Bruce deadpanned. Married 10 years, they had formerly lived in Westfield, New Jersey. Mary-Beth, a New Jersey native, had resided in Annapolis and Montgomery County several times during her adult years. Bruce, a 40-year resident of Westfield, retired after a 30-year career with McGraw Hill. Mary-Beth has owned or managed several businesses including a flower shop and a party and event business, and several hotels. 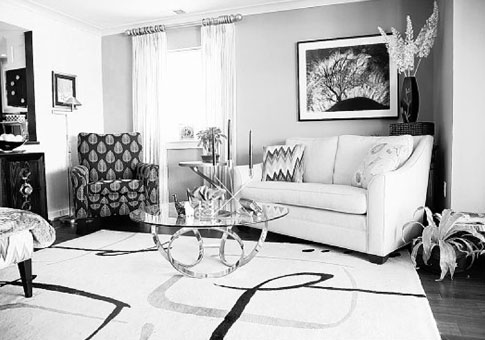 As Bruce’s retirement date neared, the couple spent three years trying to decide where to spend their golden years. They looked in Burlington, Vermont; Portland, Maine; and other spots along the Eastern seaboard. “We also spent a lot of time looking for a house,” said Bruce. Their search narrowed when they decided they didn’t really need a big house requiring a lot of maintenance and upkeep. Owners of a seven-bedroom Victorian-style home, they began the hunt for a condo with two bedrooms and two baths, ideally spread over two floors.
The duo realized they’d have some major downsizing to do and shed nearly all of their old possessions.

The condo they decided upon featured a loft-like second floor half the square footage of the main floor, and a soaring 20-foot-high ceiling. They quickly decided they didn’t need all that open space created by the lofty ceiling when it could be better utilized as a room. They contacted Catherine Purple Cherry, owner of Purple Cherry Architects. Working with her, Andy Apter of Apter Remodeling & Construction, and project manager Kevin McKibben, the condo’s floor plan was dramatically altered. 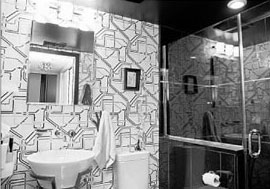 Utilitarian Masterpiece
They converted the open loft to an addition on the second floor. The couple also tore out the original winding staircase and had one built more suited to their lifestyle. Apter built the staircase to more easily enable the Phillips to age in place. The treads are wider than average so a climber can place his or her entire foot on each tread. The risers are shorter; there is less of an angle for hips and knees, making it an easier ascent and descent. The eye-catching iron handrail, evocative of a Mondrian painting, was crafted at the forge of Frog Valley Artisans, Berkeley Springs, West Virginia, by artist Mark Schwenk. Lowering the ceiling on the first floor of their condo did not reduce the impact of the dramatic view. “We love watching the ever-changing scene outside,” she said. “The Parade of Lights, the fireworks on New Year’s Eve and Independence Day, the concerts on City Dock at Susan Campbell Park. It’s everything we ever wanted and more.” Bruce, now president of the Tecumseh’s board, noted they had a lot of fun renovating the space, from gutting it to creating the new floor plans. “We did a 180-degree change,” he said. “And the view? Sweet.” “We never get bored,” his wife said. “It’s a fluid landscape, dynamic and ever-changing, a living waterfront. We love watching the old tall ships coming into the harbor. It’s the best view in Annapolis.” The view included a vista of Carroll Gardens on the campus of St. Mary’s School and Church. 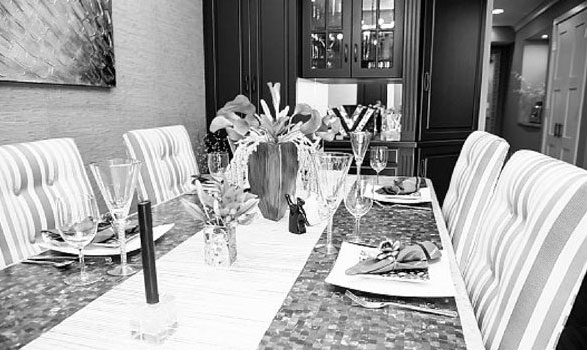 A visitor entering the apartment walks down a short hallway. On the immediate left is a sun burst of a guest bedroom, decorated in lemon yellow, white and black. The bed is a snowdrift of pure white, topped with a black-and-white hound’s-tooth patterned roll pillow. The wallpaper behind it depicts a chic Manhattan party scene. A brushed steel chair across from the foot of the bed has a human form. The chair’s arms are, literally, arms. On one wall is a collection of classic New Yorker magazine cartoons which was remodeled a few months ago by a local company just like this Moveable Partition Maintenance. In one, a group of Indians is negotiating the sale of Manhattan to a cluster of Pilgrims for $24. Further on, the hallway opens up, to the right, on a dining room, and a kitchen on the left.

In the dining room area, the couple planned to remove an all-white wooden cabinet. They rethought their decision and painted the cabinet a matte black and added a corner unit. Across the hallway, the kitchen, sporting a new floor, counters and mosaic-tiled backsplash, is a black and white checkerboard pattern.

Walking into the kitchen, a visitor occasionally will shriek with laughter. The source of that reaction is the knife block. “It’s a gift from Bruce,” Mary-Beth said. “It’s called ‘The Ex’.” “The Ex” is a dark steel human figurine that serves as a resting spot for several sharp knives. It’s a fast-seller on Amazon.com. Beyond the kitchen and dining area is the living room and The View.

A framed artwork on one wall appears to be of a giant tree surrounded by flames or a raging wind storm. A closer look reveals it is a photograph. Bruce explained it’s a photo taken decades ago by his father, Max. Shot from 40,000 feet, his lens captured the spread of a Venezuelan river delta. “All of our artwork has some personal connection,” Bruce said. 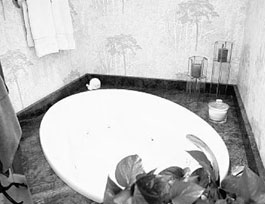 Déjà View
On the second floor, the couple added a skylight, providing more sunlight in their office area. In the bedroom, the couple can recline in bed and view the scene floating by. It has hidden night stands in the walls flanking the bed. The couple showed off the hidden, walk-in closet, the compact yet roomy office area, and other aspects of the meticulously planned floor. As they did, they shared their own inside joke. “He said, ‘We’re not moving south,'” said Mary-Beth. “We’re not getting a boat … We’re not getting a big boat … Want to see the new, big boat?”